The famous abandoned House of Horror stands alone in the middle of the woods. But according to many of scary stories, seems to be still inhabited... 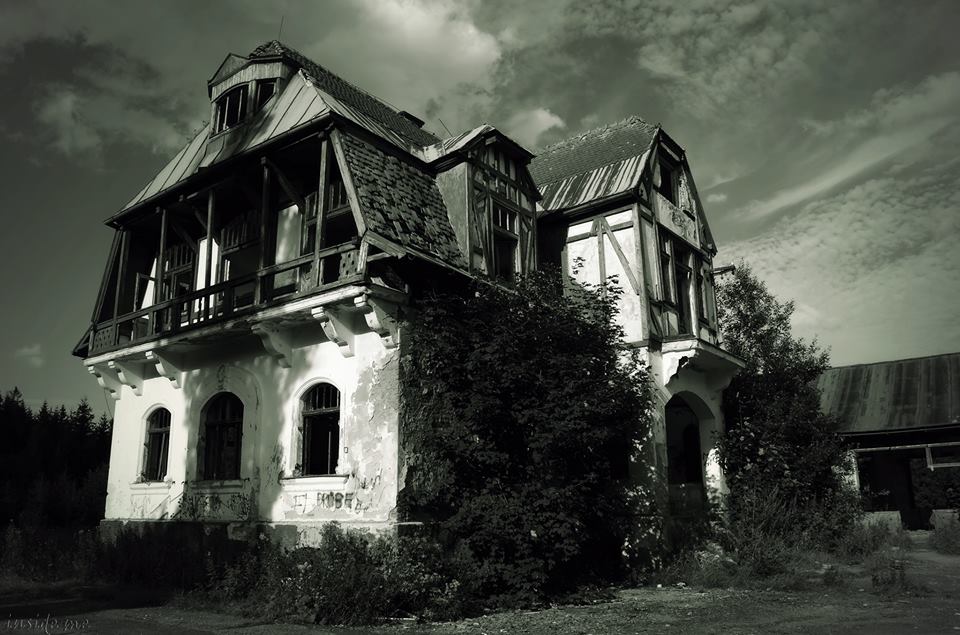 Faces protruding from the walls, shadows of figures, mysterious whispers and voices or sudden changes of temperature in rooms. Cars often don’t start there and bateries in cameras or another electronics run out extremely fast. Some of local mysteries and paranormal activities were also documented on photos or videos. And if you still don’t believe, come to try it on your own skin!

The famous House of Horror is a frequent tourist destination for lovers of mystery, paranormal and Urbex. The building is unsecured, so it is possible to enter on your own risk into the crumbling interiors. Be extremely careful – thanks to the raids of vandals and swampy ground around the building deteriorates its technical condition significantly each year, and in some rooms there is a risk of ceilings and floors crash actually real.

The story of Nimrod Hotel

The building is more than hundred years old and there was a very popular Café in past times. The place was visited by the most of important guests of Marienbad as was British king Edward VII or Czech president Eduard Beneš. The golden times ended with a beginning of the 2nd World War. The hotel changed to sanatorium for soldiers and it was probably the moment when everything began – since these times strange things happened more and more frequently.

Who are the ghosts guarding this old and almost destroyed building? There’s more theories. Somebody say, that it’s because of old gallows and cemetery located previously nearby this place. Other people think that it’s a relic of dangerous swamps and you can meet here the ghosts of people who drowned unhapilly. But Nimrod was also a location passed by the Death March from Nazi Death Camps located in the border zone. Was the building a place where something terrifying, maybe even some murders, happened?

If you’re considering the visit of Nimrod hotel, please respect the history and importance of this place for locals – don’t destroy the building and its interiors even more than it is. Help us to keep the hope, that this magical and sadly beautiful place will be saved for next generations as well.

All photos by: Inside Me