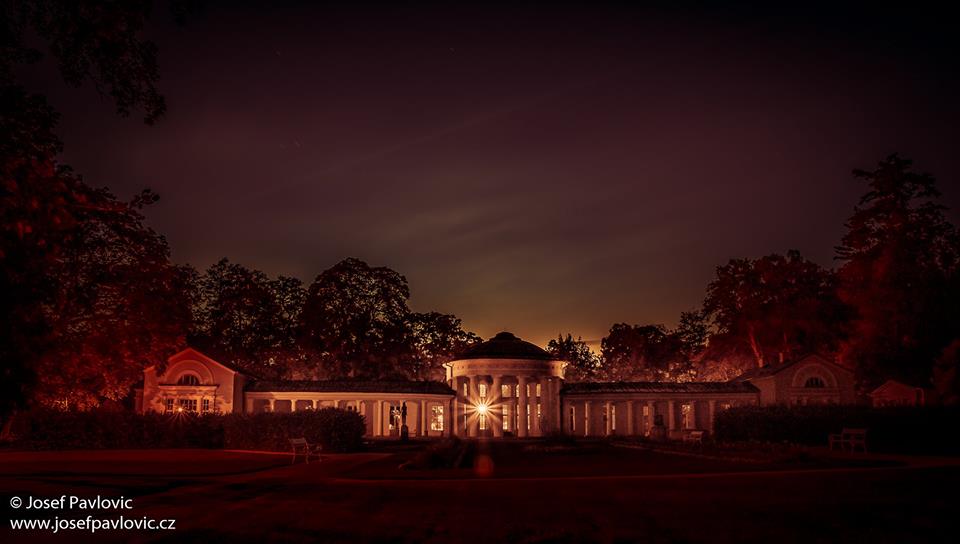 If somebody in Marianske Lazne says „The Colonnade“, usually it means a Colonnade of Maxim Gorkij known as well as a „Main“ Colonnade. But maybe you don’t know, that in fact you can find four fantastic colonnade buildings in Marienbad and each has its own magic. Anyway, you don’t know enough about this nice little spa town without visiting all of them.

The oldest colonnade is roofing a Cross Spring and in a certain sense this building is a real heart of Marienbad. Inspired by the Roman Pantheon it’s a peak of 3 parts of town parks and it’s offering mystical impressions – enjoy the game of light and shaddows between corinthian columns, atmospheric circular spring seepage, forming a single unit with a roof dome and an impressive gilded chandelier. There’s a souvenir shop where you can buy tradicional tasting tumblers – don’t forget to taste Carolina and Rudolf springs as well.

This promenade is just incredible! The new Baroque building with its long above 180 meters is based on an iron construction and it’s combining unique industrial architecture with romantical impresses of an old-time high society. But the most surprising is a cellar decoration – yes, there are astronauts and a space satelite on the ceiling frescos! How is that possible? Colonnade was renewed in 70’s and this cycle of ceiling frescos is actually pretty modern and it’s showing a human’s desire to fly. It’s a work of artist Josef Vyleťal, famous czech surrealist and a personal friend of Salvator Dalí.

This small collonade is ending the main promenade and offering nice views of the Catholic church and the opulent building of the „New Spa“. The Colonnade was rebuilt in its present form in 1872, but in fact, the building is only 30 years old. In 1986 was the water spring too fade and all the colonnade needed to be moved about 10 meters aside. The best solution was to make an exact new copy of the old building and later destroy the old one. But before it was finished, for more then one year there was two exactly same colonnade buildings just next to each other! You can still find a place of an original seepage, it’s marked with a circle from the tiles and it’s situated between the present colonnade and the street.

The peaceful place, situated in the park and ideal to take a blanket and make a picnic, or just enjoy the rest and quiet around. The Empire styled building is from 1829 and is roofing the oldest water spring found in Marienbad. It’s called Ferdinand, because this famous emperor was the first one, who ordered the investigation of the water source because of the opportunity of producing the table salt. Unfortunately the salt had a laxative effect, so finally it needed more than 200 years to find a proper use in healing therapies. The park around the colonnade is also the Best place in a town where to play petangue (check out local tournaments), frisbee or other outdoor games.

All photos by: Josef Pavlovic